With its 11 time zones, geographical size and 146 million population, Russia represents one of the largest automotive markets in the world, with colossal logistic demand and great potential for growth.

Since 1998 almost 30 automakers have built numerous production plants in the country and fuelled the demand for high-quality cars. Sales of new cars at almost 2.9m units has peaked twice: 2008 and in 2013. After the introduction of sanctions in 2015 and devaluation of the ruble growth has been suppressed. In 2018 new vehicle registrations rose to to 1.9 million (of which 1.7 million were passenger cars). Even disregarding the 5.4 million used car market, the €30+ billion new car market, with a high penetration of foreign brand C and SUV class vehicles, remains a focus of interest for the major OEMs. Since the start of 2019, Mercedes-Benz, Hyundai/Kia, Toyota, Mazda, Mitsubishi, PSA, VW, BMW, Fiat, Renault-Nissan and others have opened new production plants in the Moscow region.

What are the drivers in the Russian automotive market?

It is hardly electric vehicles — although around 3,600 fully electric vehicles are now registered in the country — out of a total of 42.4 million cars on the register. The main driving force is a basic as-yet unfulfilled need in the economy for cars and transportation. Compared to the rest of Europe, Russia has:

And all these factors are being multiplied by an ageing fleet that constantly requires renewal. For example, 23 million cars — or 54% of all-Russia’s total car fleet — is more than 10 years old. This is not to mention the commercial vehicle fleet that, on average, is even older. These factors create a large opportunity to deploy both traditional and modern finance products for both car purchase and car usage. There is enough space for both. That is why new forms of car finance have already entered Alexander Mikhaylov, CEO LC of Europlan: 12-15% growth in Russia NEWS AROUND THE GLOBE | RUSSIA | the country without waiting for the fulfillment of conventional methods of finance. It is interesting that although 85% of 1.7 million new passenger cars are being sold in Russia to private individuals only 49% of them use finance (mostly car loans) to buy a vehicle. Consequently a large 51% of direct purchases leave a lot of opportunity for other forms of financing or even other methods of car ownership.

With introduction of ridehailing firms such as Yandex- Uber and Gett, the quality and convenience of city travel has increased, together with a decrease in cost which was much welcomed by users. There has been significant growth in taxi markets in Moscow and leading Russian cities. The taxi market has doubled in just four years between 2014-2018. Car-sharing, being a relatively new service for Russia, has shown even higher growth. In 2018 alone, the service jumped more than five times from 3,000 cars in 2017 to 15,000 cars by the end of 2018. The Moscow City Government supports this initiative with parking privileges and subsidies to car-sharing companies for their leasing payments. According to JP Morgan, Moscow reached one car-sharing car per 1,082 Muscovites in 2018. Being one of the fastest growing car sharing markets in the world, Moscow is on the way to reach one car-sharing car per 500 Muscovites that will bring the Russia’s capital to the levels of Stuttgart or New York. Car-sharing is also developing throughout the country, primarily in St. Petersburg and tourist cities, such as Sochi. In the corporate segment, automotive leasing is leading the way and constantly increasing its share. Now around 30% of business car purchases (and much higher for commercial vehicles) are delivered with leasing, primarily full-payout financial leasing. Automotive leasing represents approximately 35% of the whole Russian leasing industry. In 2018, the Russian segment of automotive leasing increased by another 19% and now is around €6 billion in volume. With this volume, automotive leasing is key for the Russian auto finance industry in both the consumer and business segments. In the business segment, automotive leasing fuels the business demand for vehicles, adds value to lessees by decreasing total cost of car ownership, and introduces new car services to its corporate customers. In the private segment, Russian car leasing plays the role of main capital provider to both taxi and car sharing operators, which increases car usage. That is why the rating agency, Expert RA, estimates further growth for automotive leasing between 12-15% in 2019.

Alexander Mikhaylov is CEO and Member of the Board of Europlan 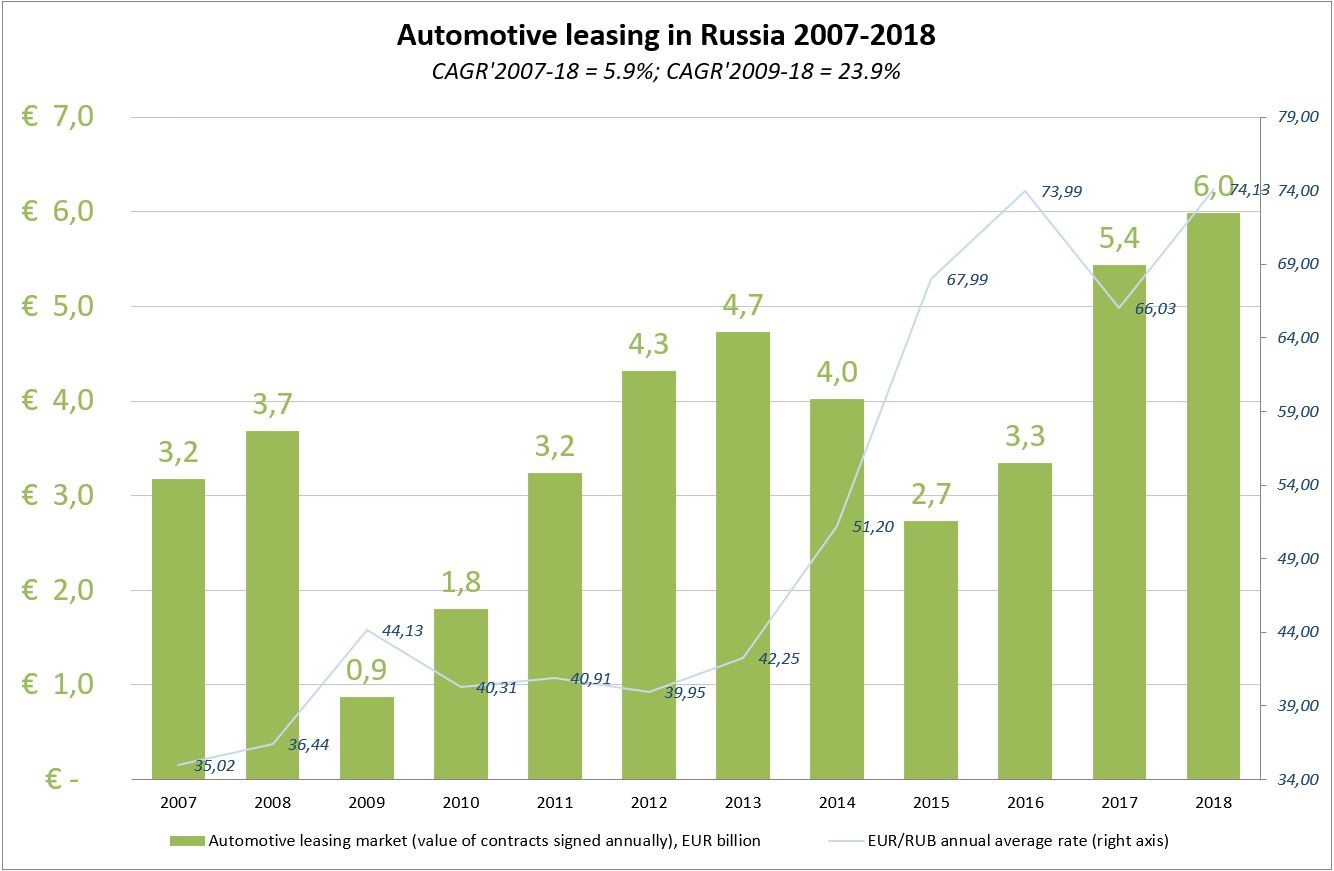